Sooner or later we all realize that spending time with family is so important.  The years drift by and we continue to say we will get together, but we never find the time.  Life has a habit of getting in the way.  My Mother and her two sisters got together again for the first time since 1998!  Now, I know that seems atrocious to many, but they were miles apart and had ailing family to care for among the myriad reasons for just staying home.

Finally, my cousins, Cindy and Julie, in Kansas drove Aunt Lorene out to Canon City, Colorado to Aunt Clella's house.  My mom was in town from Oklahoma so we made the trip down to Canon as well so the three could be together again.

We left those three alone at Aunt Clella's house while the cousins spent a great time together at our Canon City cousin's house, Pammie--oh, pardon me, Pam.  Pam has a very cool job working at the Royal Gorge bridge and arranged for us to spend a day at the gorge.  Oy vey!!!!!  What were they thinking???  Should human beings really build something that high??  And I found out that it is the HIGHEST suspension bridge in the WORLD!!  Remember that Jimmy Stewart movie, Vertigo???  I can relate.  Here's a shot of the tiny train in the gorge from the top.  Really?

We rode a tiny train that we found on the way up the canyon to the bridge and decided we better ride it--seemed like a tourist thing.  We rode it for 30 minutes and it stopped out on an overlook for brave people to get out to look around and perhaps take a photo or two.  Nope, you won't find any of those photos here.  That's right, I got out, walked to the edge and promptly returned to my seat.  No way, not my cup of tea. 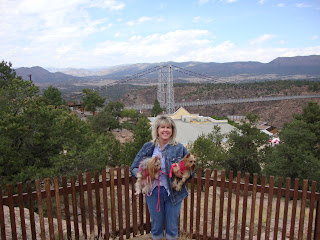 Here's where we had our lunch on a nice little picnic table.  I took a shot of my cousin, Julie, with her two little dogs so you could see the bridge in the background. 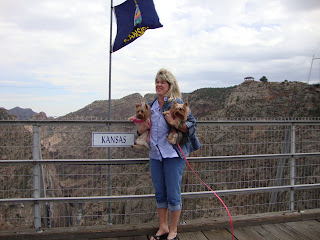 Here we are on the actual suspension bridge--did I mention the HIGHEST in the world??  And the nut wanted her picture taken by the Kansas flag WITH her two little dogs!!  Come on, can we possible be from the same gene pool??  This girl is nuts!  Of course, I was on a golf cart with a death grip on the wheel smack in the middle of the bridge (sorry folks, you can't pass now) saying get back on we are going. 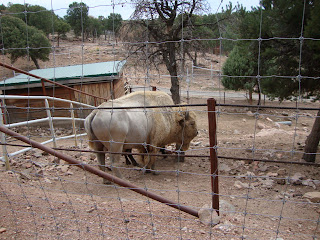 We did get to see some White Buffalo on the other side so that was a little worth it.  So regal!  No wonder they were viewed as some mystical, great medicine. 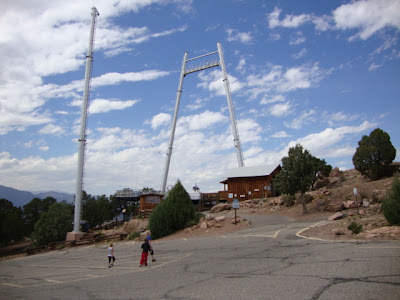 I made this picture extra large so you can see the little black dots hanging in the middle of that big silver H.  Those were three CRAZY people hooked up to some kind of line and then they actually swung them over the gorge.  All I can say is . . . Really??? 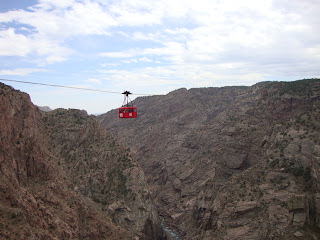 People rode in this little contraption across the gorge as well.  Notice I have pictures from the OUTSIDE!  Nope, no way, you will not see any from the inside.
Sunday we took a ride on that tiny little train we saw and found out it was really a big train.  We took the lunch tour from the Vista Dome car and I must admit that it was spectacular!!  The views were awesome and well worth your time; plus it just seemed much safer to be at the bottom already! 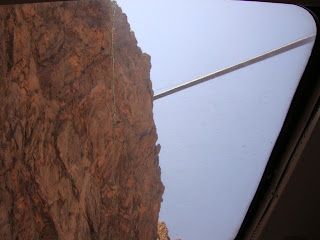 Here's a shot of the bridge from below.  See, much safer, don't you think??  Colorado has some gorgeous country and I will admit that this was such a fun trip for all of us.

Just wait until I show you the shower pictures.  Pammie's daughter, Alicia, is getting married so we were able to attend her bridal shower.  I'll show you some of those later.

Take some much needed time to spend with your family and friends.  After all, that is what is truly important to us, isn't it?

Tomorrow we pack to head to Key West, Florida to spend a week with our girls, Shilo and Tara!!  Can't wait!


Posted by Momma Goddess Treasures at 12:17 AM

Read all of our Wedding Jewelry, Unique Wedding Services Reviews at

See me on Handmade Spark!

I'm a Member of UWIB

I'm in the CRAVE Denver Guide! 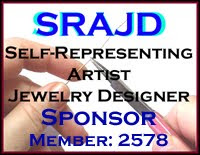 Check out my Newest Designs!

Some of my Treasures

Check out this Unique Woman in Sales!

From my Wedding Bells line 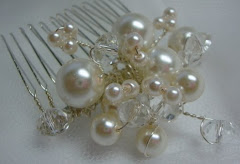 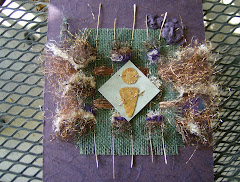 All I need is a shadow box frame